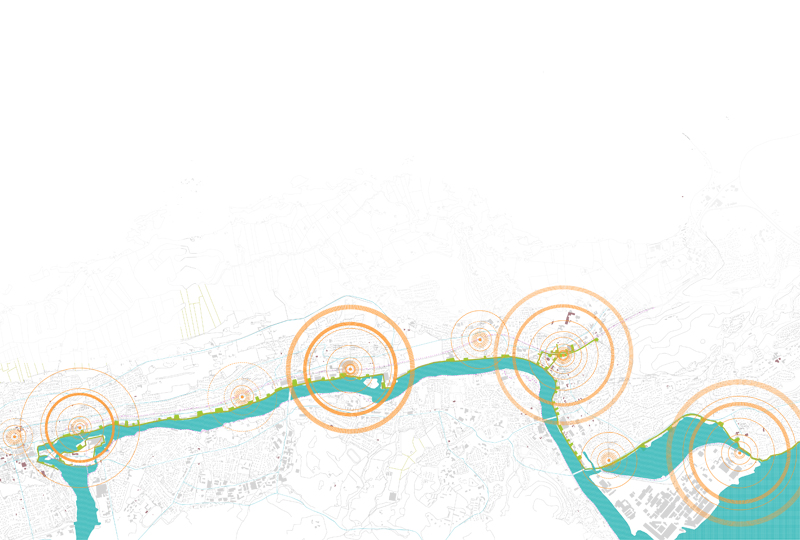 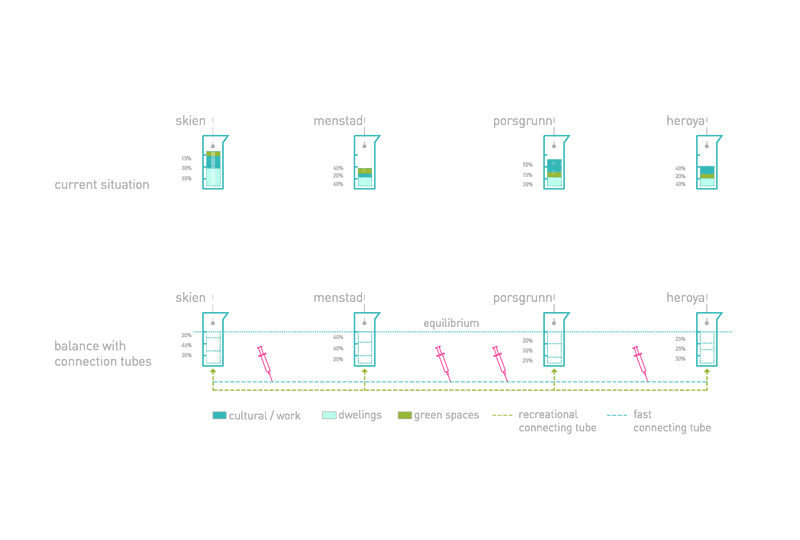 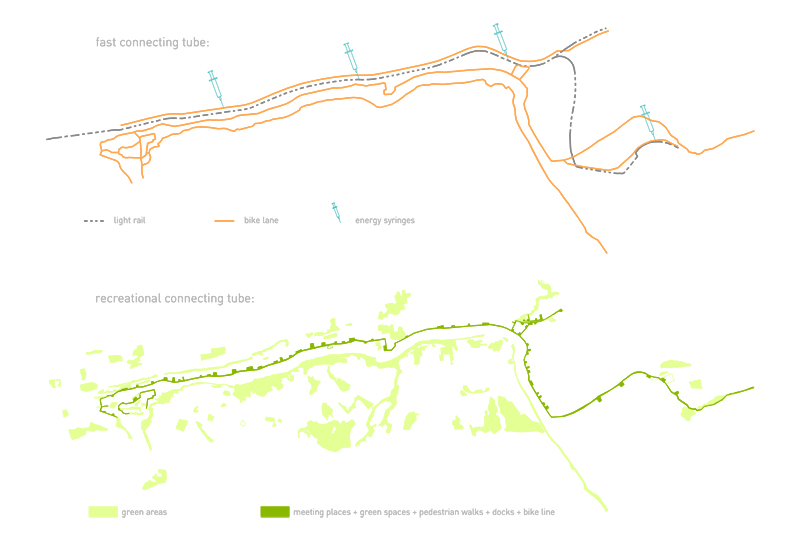 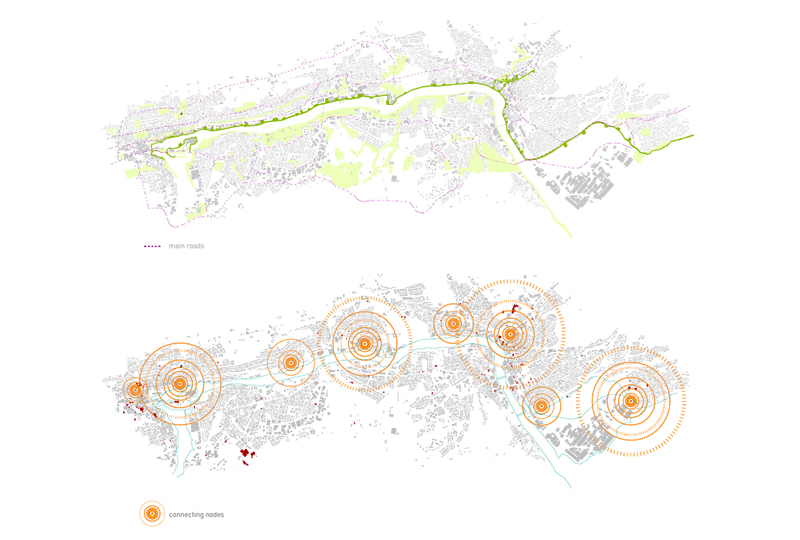 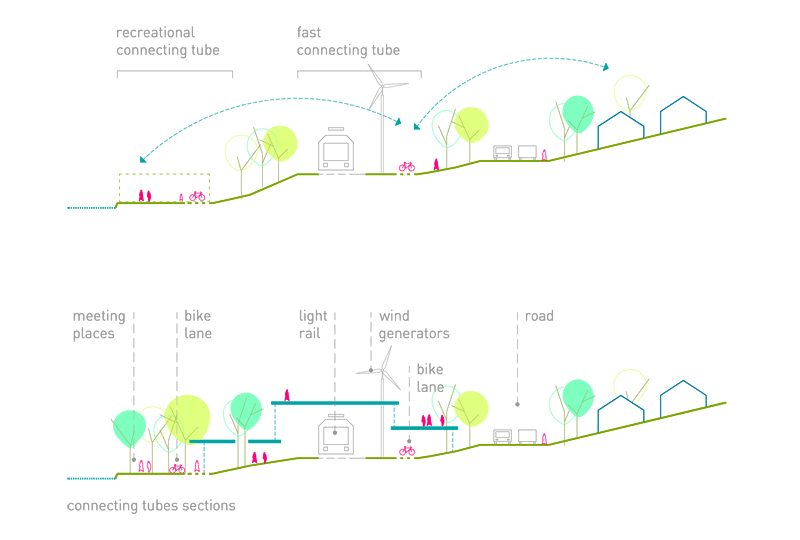 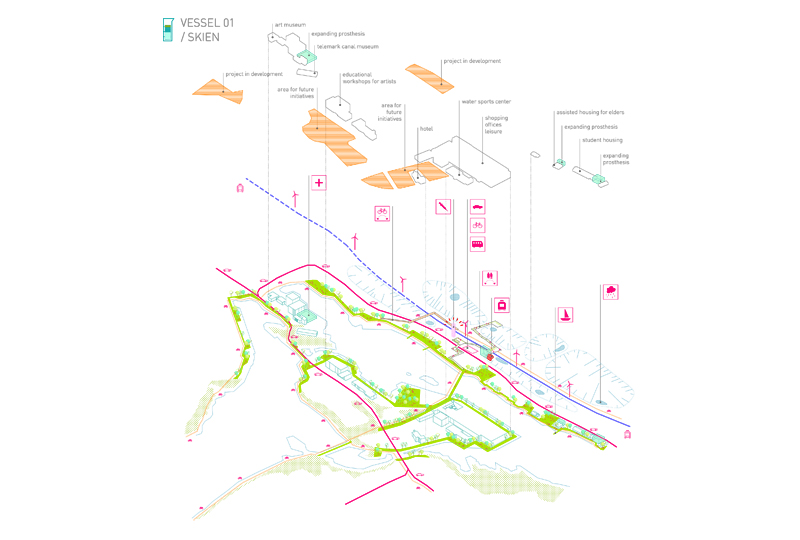 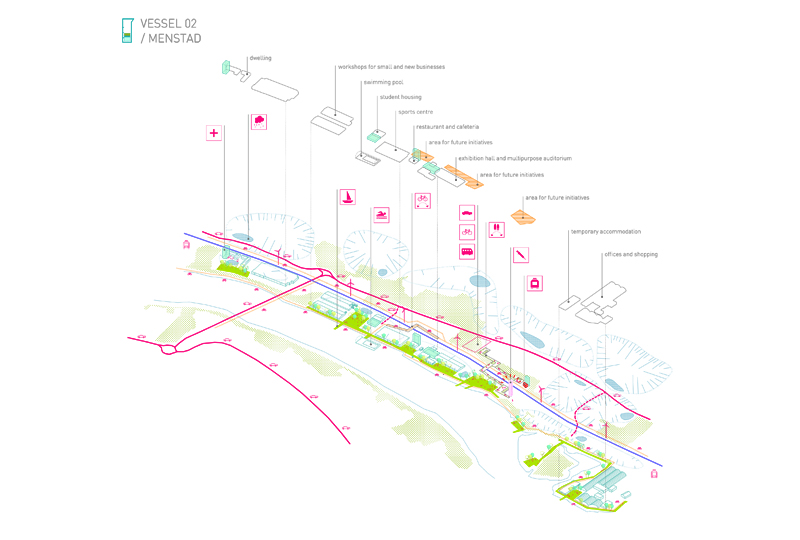 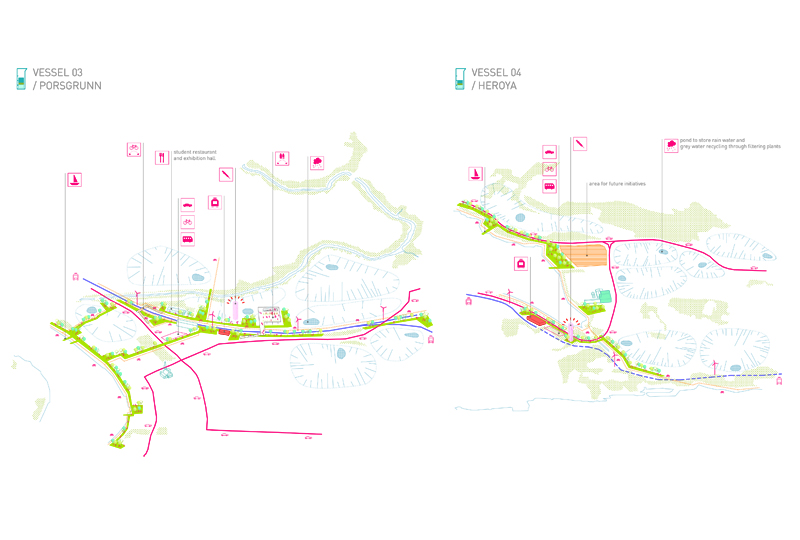 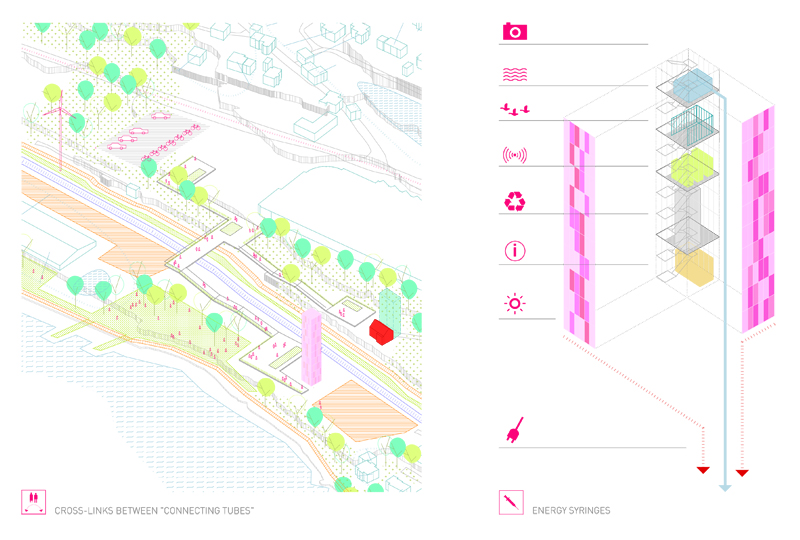 COMMUNICATING VESSELS
Communicating vessels is a name given to a set of containers containing a homogeneous fluid: when the liquid settles, it balances out to the same level in all of the containers
The current situation in the Grenland area is the existence of multiple independent cores distributed along the river, with poor connections among themselves, making it impossible to achieve a balance of uses and resources between them.
Our proposal is based on the example of communicating vessels to explain the need to improve and create new channels of connection between the «vessels» that already exist. (Skien, Menstad, Porsgrunn and Heroya) It will generate the desired equilibrium, where each core can benefit from existing resources in any of the other cores. This way we define the intentions for a new model of city growth, more ecological and social based.
The goal is attracting life and creating urban regeneration for the whole study area, just with small interventions, but highly interconnected

CONNECTING NODES
The operation begins with the selection of strategic points where we place the connecting nodes. They will work as anchor points for an overall improvement. These nodes function as exchangers between different ways of transportation (bike, car, bus and light rail)
We base our connecting nodes in the existing railway stations, and a new station at Heroya.
A good connection between these nodes makes them work in a more powerful way, creating a network where the energy or resources excesses of other areas are distributed in a balanced way.

CONNECTING TUBES
The main element of our proposal are the tubes that connect the different “vessels” together. We call them «connecting tubes». Through these tubes the Grenland area will no longer be a series of separate cores. It will become a group of “vessels” working as a unit, based on a transfer system.
Inside these channels run different types of liquids:
– Landscape (vegetation, trees, river)
– Movement (pedestrian, bike, bus, light rail)
– Infrastructure (water, electricity, wind)
Through the»connecting tubes», each «vessel» exchange with the others its energy or program excess, responding efficiently to different demands.
We propose 2 types of «connecting tubes»:

«FAST CONNECTING TUBE»
Formed by:
LIGHT RAIL: It is the main element of this tube. It will take advantage of the existing railroads and train stations. This operation will improve communications, will reactivate the area and will help decrease the use of private transport.
WIND GENERATORS: They will be established all along the fast connecting tube, providing an idea of sustainability to the light rail intervention and generating an energy supply that will return directly on the train.
BIKE LANES: At this moment, bikes use the same road used by cars. If we want bikes to be efficient, so people will use them instead the automobile, there must be continuous and independent bike pathways that connect different areas quickly, without being interrupted by other transportation lines. We propose a bike lane parallel to the new light rail and a series of overpasses and bridges formed by ramps to ensure continuity of the course and cross-connections. Furthermore, we propose several bike parking and renting areas on the different connectin nodes .
BUS LANE: The problem of the bus throughout the Grenland area is that it uses the same road as cars, so waiting times are very large and it is no longer an efficient transportation.
We propose the addition of a dedicated lane for buses along the fast connecting tube, which will increase the connection speed between the different “vessels”.

“RECREATIONAL CONNECTING TUBE”
Formed by:
MEETING PLACES: We create several meeting spaces open to the water and interconnected. They are places with multiple possibilities and diverse activities. We believe that these places will generate a vibrant public life and new attraction for the Grenland area.
GREEN SPACES: Through the incorporation of new trees and native vegetation, we generate a link between existing green spaces. This way we create a continuous network
and we try to recover the shore ecosystem.
PEDESTRIAN WALKS: Pedestrians will be able to walk along the river’s edge through continuous footpaths.
DOCKS: We place several docks where people can have closer contact with water. They will encourage the use of ships for tourists, recreational activities and transportation.
BIKE LANE: We propose another bike lane parallel to the river with a more recreational orientation than the one proposed for the «fast connecting tube», with multiple cross-connections between the two of them.